apaulled's brother sent us a gift certificate for Christmas good at many local restaurants, one of which was Medieval Times. So since both sons are home this weekend and it's too early for local Renfaires, we went to the one in Arundel Mills Mall for an early dinner and show. The jousting is much more like the Pennsylvania Renaissance Faire's staged battles than the Maryland Renaissance Festival's competition, but the stage fighting was good, the horses were very well trained, there was a falconer, and they had a vegetarian menu (hummus and pita, stuffed red pepper, veggie kabobs) in addition to the regular one (chicken, beef, and potatoes, everything eaten by hand, plus everyone gets soup, bread, drinks, and apple pie). So it was lots of fun. 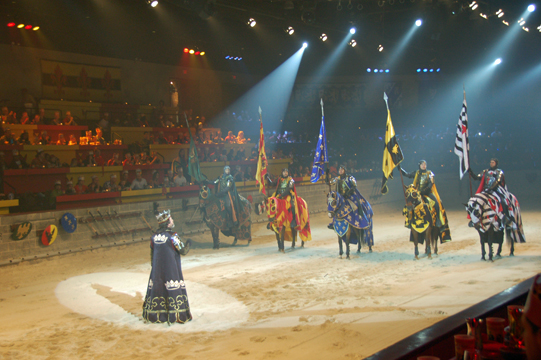 In the evening we watched the entire early sixth season arc on Deep Space Nine through "You Are Cordially Invited" which I've never rewatched since first viewing though I've also never forgotten it; it's some of the best television ever made and now that I know how things end, it's so much more enjoyable to see how certain characters interact -- Odo and Kira in particular, since I was so furious with Odo the last time around. I'd forgotten how despicable Damar was when we first got to know him, too, I always remember Damar from the end when he was heroic and as willing to die for Kira as for Cardassian. I am deeply gratified that my kids agree that DS9 is by far the best of the Treks.
Collapse