My Monday was very quiet. I got a lot of work done and ventured outside very little, since it rained all day -- which we still needed, after so many weeks without. Adam neglected to tell me that he was going home after school with his girlfriend, so I had all three cats begging for attention until he and Paul both got home. Lots of birds came to hang out under our deck overhang even though the bird feeder is almost empty, so I saw quite a bit of this: 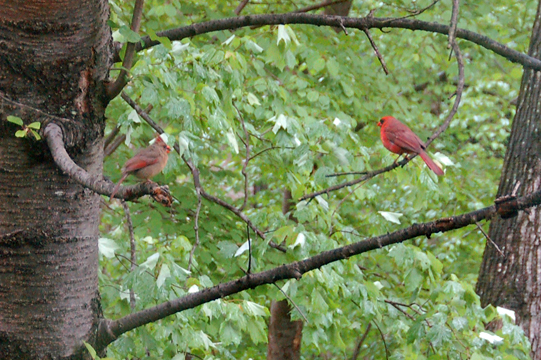 After dinner we watched Sunday night's Once Upon a Time, which I found kind of uneven; I love Rumpelstiltskin but everyone in the modern era pales compared to their fairy tale equivalents, particularly the colorful, complicated ones. Then we watched this week's Smash, which had great music but on which I kept waiting for something they showed in a preview to happen -- I guess that's going to happen in a future episode, like, opening night five minutes before Uma Thurman is due on stage, that's my bet.
Collapse