dementordelta had to work all weekend and I had a funeral, so we decided that we both needed a day to decompress. Our original plan was to go see The Avengers, but the timing of the shows wasn't great (we'd have had to skip lunch) and I discovered as she was driving up here that W.E., Madonna's Wallis-and-Edward movie, was on Amazon Instant Video as of last week, which we figured meant we were destined to watch it. It's not great, but it's not nearly as heinous as the reviews made it out to be; as Delta said, it's not even the worst movie about Wallis and Edward out there. Abbie Cornish looks uncannily like young Meg Tilly with dark hair and it's impossible for me to look at Katie McGrath as Thelma Furness and not see Morgana, but the costumes and interiors are lovely and we just ignored things we knew to be factually wrong.

We went to Lebanese Taverna for lunch, then stopped in Tuesday Morning to see whether they had any new half-price Barbies or awesome stationery (they had both, so we both now own the Grace Kelly To Catch a Thief doll and some cards). Then we came back to my house because we had also discovered that the BBC Romeo and Juliet from 1978 -- with young Alan Rickman as Tybalt and younger Anthony Andrews as Mercutio -- was streaming for free on Amazon Instant Video. It wasn't the best production of R&J, but the tights and codpieces alone made it worth watching. Paul took Adam to Glen Echo to see about internng there over the summer. After Delta had to go home, my family had tofu dogs and watched Smash, which these days makes me roll my eyes except when someone is singing. Here are some of non-sheep photos from the Sheep and Wool Festival: 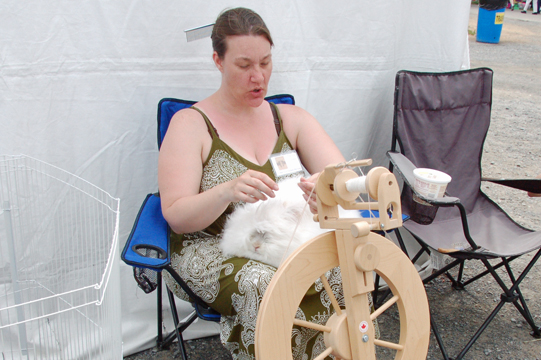