Monday was a gloomy, rainy day, though that didn't stop me from anything but getting to take a walk in the woods.

apaulled was working from home because his car was in for maintenance. Our power went out a bit after 11 a.m. and PEPCO said it would be more than an hour to restore for the neighborhood, so we went to the Indian place in the mall for lunch, then went to pick up his car. The power came back on just as we got home, so we worked for several hours, then watched Jane Eyre which we needed to record again because our old disc wouldn't close.

Adam brought a friend home to study for the A.P. exam on Tuesday after walking home in the rain -- they were drenched. We had leftover veggie meatballs for dinner, watched Sunday's Once Upon a Time -- cheesy special effects but satisfying season finale -- then watched Smash, which I almost just called Glee which in fact it what it deserves as many of the characters remind me of Rachel Berry and I don't mean because they have great singing voices. ( Collapse ) Here are photos of the 20th Maine Volunteer Infantry Unit, the Civil War reenactors who were demonstrating last weekend at Great Falls what Union soldiers ate, how they kept themselves entertained, what their tents were like, and how they practiced medicine: 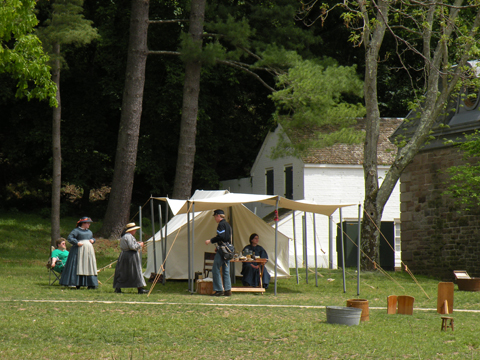