The weather cleared for most of Tuesday, though we're having a thunderstorm tonight. I spent a lot of time reorganizing my jewelry box after having bought one of these for my beads (which are mostly cheap knockoffs of Brighton and Pandora). Then I went to meet

twistedchick at the Silver Diner, where I had a very good egg-white-and-feta omelet that ended up earning me a coupon for a free meal because I hadn't ordered it with egg whites -- I had assumed maybe it came that way and I hadn't paid attention to the menu, since a lot of the items are heart-healthy, but a manager came over and gave me the coupon anyway.

After lunch we went to walk around Appalachian Spring and Tiara Galleries, but before we could go anywhere else, Adam called to tell me that after taking an A.P. exam and going to lunch with his friends, he'd arrived home and realized he'd forgotten his key. So I rushed back to let him in and did some work till

apaulled got home. After all the rain, the woods were very green, and I saw several deer, a couple of bunnies, and a fox kit quickly followed by the mother -- that's two foxes in daylight this week, which is unusual around here. We watched the Glee two-parter, which was ridiculous in a number of ways but I loved the retro songs (more that, less Nicki Minaj please) and I loved Unique. Great Falls goslings: 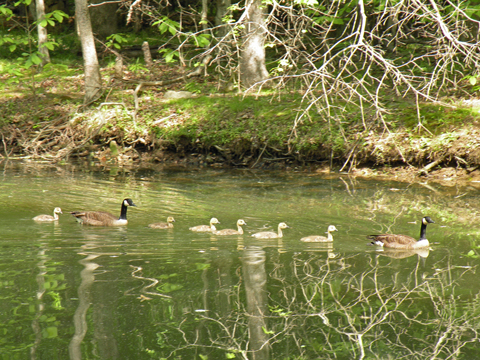