I had a fairly quiet Friday. Daniel, who apparently stayed up at least till 3:30 a.m., slept very late, so I spent the morning working on a review of Deep Space Nine's "The Alternate", not one of the best but it's an Odo backstory episode which makes it worth watching. When he finally got up, Daniel decided he wanted a Haagen Dazs milkshake, so I took him to the mall and went to admire the new Brighton nautical charms (why yes, I do have the while he was having his Belgian chocolate.

We had dinner with my parents, then Adam went to sleep at a friend's and the rest of us watched the Nikita season finale, which had about eleven shark-jumping moments but I have never cared about the plot on this show anyway; there are three completely awesome kick-ass women who are regulars and now there's a female VP of the US too. After that we watched the last four episodes of DS9's sixth season, which are mostly sad episodes but really terrific. Here are some photos from Great Falls last weekend -- mules, turtles, a millipede, and a few more goslings: 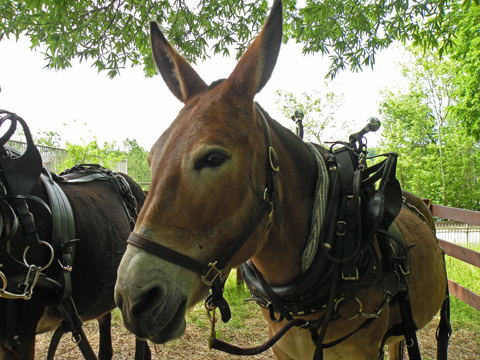