I have been threatening Daniel all week with misery and abuse and today I carried out my threat, dragging him clothes shopping. He needed new shorts whether he was ever going to admit it or not. I was nice and let him sleep late because I wanted to run out to the first day of the Vera Bradley sale at Tiara, but I ended up not buying anything -- I need a dark-colored crossbody bag big enough to carry my camera, Kindle, phone, and wallet and nothing fit those requirements perfectly -- then I came home, dragged Daniel out of bed, ate lunch and took him to Kohl's. After such torment I also took him out for ice cream.

It was a three-bunny, one-deer afternoon in the woods, which were warm and humid and feeling very much like summer. We had Indian food for dinner, watched the DS9 episode I need to review this week, then watched the series finale of Awake, which was pretty devastating; I wasn't really expecting a resolution that would also lead to a happy ending, just one that would tie up the storylines and let Michael understand what had happened to him. ( Collapse ) Here are photos of animals at Great Falls last weekend, with older goslings, turtles, a large moth, and two skinks: 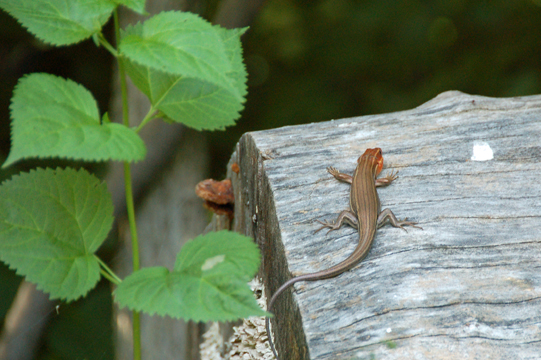