Paul's parents are going to the west coast for a couple of months to visit all the relatives out there, so they came to spend Saturday with us. We had brunch together, dropped Adam off to work at Glen Echo, then went to the Hillwood Museum, where it was extremely warm and sticky in the gardens but lovely as always in the mansion and visitor center. There were several tour groups going through and we caught sections of their docent-led presentations, particularly in the icon room where Marjorie Merriweather Post kept her Faberge and other Russian imperial treasures and in the upstairs bedrooms where we learned that Post had a closet converted to a soundproof bedroom for a son-in-law who snored too loudly. We also went to see the exhibit on Napoleon, Russia, and the War of 1812 in the Dacha. 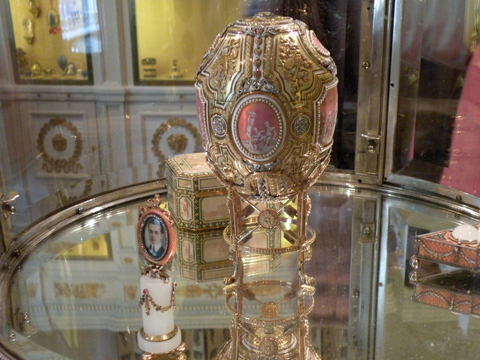 When we left Hillwood after walking a bit in the gardens, we went to pick Adam up at Glen Echo, got ice cream and lemonade, and walked around the park since my in-laws had never been there. Volunteers are already setting up for the folk festival next weekend. We came back to the house for a while so Adam could walk the neighbor's dog and Daniel could get out of the heat, then we went to California Tortilla for dinner. After Paul's parents went home, we watched several Deep Space Nine episodes -- we're now in the final stretch, the long arc that ends the series.
Collapse