Paul and I took the kids and met

dementordelta and Lin at the Virginia Renfaire, where it was as hot as it always seems to be -- there was a bit of a breeze, and it wasn't terrible in the shade of the more open tents or the woods, but I managed to get sunburned despite wearing sunblock. We had fun anyway -- they had full jousting this year, plus the Ship's Company Chanteymen were performing, and we went to see Thunder and Spice, the Surly Mermaids, and various performers around Staffordshire. Adam was unhappy at being dragged around to the jewelry merchants but Daniel was easily placated with cheesecake on a stick. 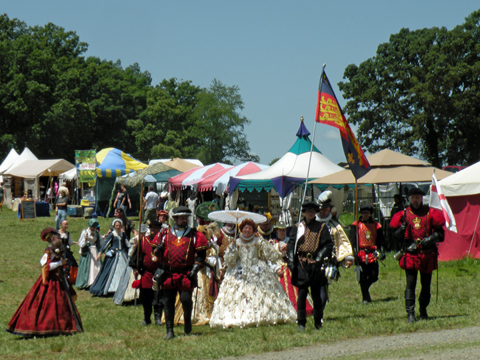 My parents called while we were on our way home to ask if we wanted to come over for pizza with them, which we did. Afterwards we came home to watch the finale of Harry's Law, which felt pretty anticlimactic, I suppose since they didn't know when they filmed it that it would be the very last so there was no sense of closure for any of the characters or couples. We then tried to watch the rest of the Memorial Day concert on PBS, but the thunderstorm we were having had caused the evacuation of the National Mall and they were rerunning the second half of last year's concert. Best wishes to all who serve, all veterans, and all families of veterans.
Collapse