I had a quiet Tuesday during which my major excitement involved taking Daniel out to get new sandals since his old ones are shredding. It was extremely hot -- we had a heat advisory in the morning, a thunderstorm warning in the afternoon, and a flash flood watch in the evening -- so I wasn't really dying to be outdoors much anyway, and Adam called while we were out to announce that he had forgotten his key and needed me to let him into the house, so any urge I might have had to drag Daniel shopping for more clothes was quashed by that necessity. I did make Daniel come with me to AC Moore, since it's now next door to Target, but he read aloud to me relentlessly from Reddit on his phone while I was buying a bracelet hook in which he had no interest.

My other major excitement for the day was a spider the size of a small mouse that tried to trap me in the laundry room, from which Daniel rescued me since I was doing his laundry at the time. Adam came in long enough to change after walking the neighbor's dog, went running, then went to the pool with a friend. After dinner we watched "The Jubilee Queen With Katie Couric" on 20/20, which was fawning -- I admire the Queen but I wouldn't curtsy to any foreign head of state, or any American leader for that matter -- but I forgave it since it had clips from The King's Speech and The Queen, lots of George VI, and lots of William, Harry, Beatrice and Eugenie being charming and self-deprecating. Speaking of would-be royalty, here are Marjorie Merriweather Post, her daughters and me at Hillwood: 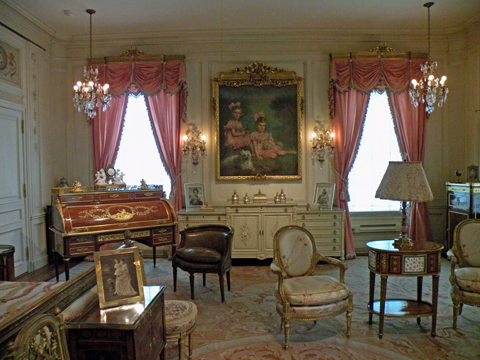