Wednesday was the coolest day since before the weekend, which was a lovely relief after the heat of the past several days. I dragged Daniel shopping -- World Market has Diamond Jubilee napkins and tins of Walker's Shortbread, heh -- and took him to Bagel City to make up for this abuse. When we came home I had lots of laundry to fold, so we watched Thor together while I did. I must confess that I like Thor and Loki better in that movie than in The Avengers and I really need to get the soundtrack.

Adam came home for a while, then biked to tennis -- I need to get myself over to Cabin John to hike now that he's doing that because I've only been walking in the neighborhood, which can get monotonous, though today there were three bunnies and two deer so I can't really complain. After dinner we watched three of the last five episodes of Deep Space Nine, which makes me sad that it's ending even though I can always watch it over again! Here are photos of performers at the Virginia Renaissance Faire last weekend: 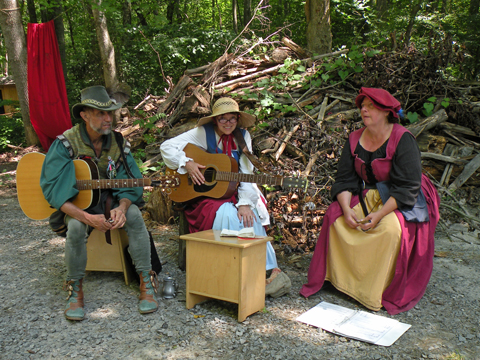