We had our minivan in for service on Thursday so

apaulled worked from home and we had lunch together while Daniel was at school and Adam was out to lunch with my mother (for which he got out of bed an entire hour before she arrived). In the afternoon while Adam was out running, we went out together to pick up the van. That would have been the extent of excitement in my day except that I got lucky and won an Amanda Clark print from a blog giveaway, which makes me very happy because I love her artwork and have her Chalice Well print!

My evening also involved bunnies, then dinner. I needed to watch a second season Deep Space Nine episode to review, which I'd only seen once but found haunting then and even more so now that I've seen Miles O'Brien's entire arc. Then we watched the penultimate episode of the series so we can watch the finale tomorrow; I am sad that it's coming to an end, and trying to decide whether to talk Daniel into Babylon 5 next -- I have never seen its first season. Here are some photos of the dogs at Bark in the Park at the Bowie Baysox game on Monday: 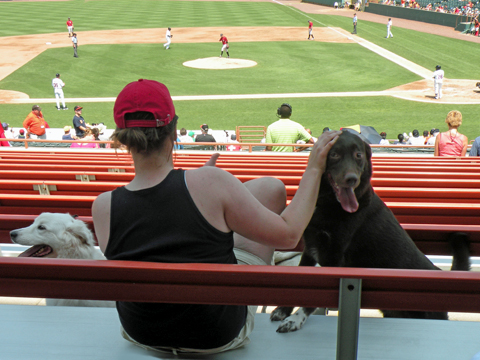 Happy June! How did that happen?!
Collapse