We spent most of Sunday at the Washington Folk Festival listening to music and looking at crafts. Adam did not go with us, since he was working at Glen Echo yesterday and got to see the festival while he was there; instead he went to play tennis and have lunch with my father while we took Daniel to hear Ocean (the full orchestra with drums, base, and pipes), Lisa Moscatiello (who did a duet with Anita Burkham), and various other performers including a full parade of pipers, Morris dancers, and assorted minstrels in the picnic area. I bought a handmade tie-dye dress and locally made perfume oil in the craft show set up in the bumper car pavilion. 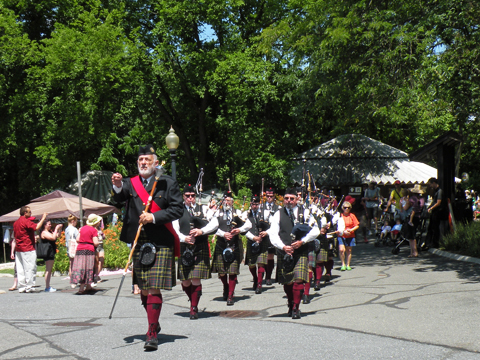 In the late afternoon we came home, reunited with Adam, returned his girlfriend's bike to her (it had been here since the thunderstorm on Friday), and I took a walk during which I saw four bunnies (possibly a fifth, though that might have been one I'd seen by the road that hopped through a cul-de-sac into the woods). After dinner -- chocolate chip pancakes -- we watched A Good Woman, which reinforced my impression that I like Scarlett Johansson much better in films that call on her to act than films that call on her to show off her breasts; she's quite enjoyable in it, though the screenplay could be wittier considering that it's based on Oscar Wilde.
Collapse