I spent much of Tuesday out and about with my kids. Adam had final exams in biology and pre-calc in the morning, then called to tell me his bike tire was flat again, so I picked up him, his girlfriend, and another friend and took them along with Daniel out to lunch at Lebanese Taverna on Rockville Pike so we could go to the bike store, get the tire fixed (it had a metal piece bent in a place it shouldn't have been) and look at bikes son might be getting for his birthday. (Maddy and I went into Tiara while Adam and his friend were testing bikes, heh.) I thought we left in plenty of time to get Maddy home by 3:30 when she was due but a major traffic light was out and we cut it very close!

I took Adam with me to CVS to pick up a prescription because he wanted to pick up a couple of things, then we came home, he went running, and I folded laundry while watching All Of Me because I was in the mood for Lily Tomlin and Steve Martin being hilarious. After dinner we all watched the concert for the Queen, which we got abbreviated for US television -- no Annie Lennox, no Andrew Lloyd Webber, which is a bummer -- but we all enjoyed Elton John's blinding pink jacket, Madness on the roof, everything Paul McCartney sang, Prince Charles' tribute to Mummy, and Will.i.am appearing without the Black-Eyed Peas, presumably because no one named Fergie was allowed within a mile of Buckingham Palace!

It was too overcast here to watch the transit of Venus outside while it was happening, though we watched some of the live feed online. I did take a walk during those hours, during which I saw two deer, including a young buck with fuzzy little antlers, and some of the neighborhood bunnies: 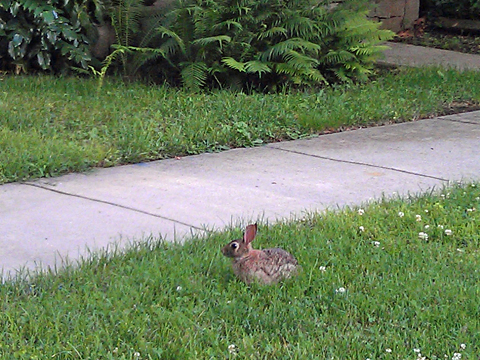