Both my kids slept till noon on Friday, leaving me to myself all morning to work on a review of Deep Space Nine's "Paradise". Eventually they got up and ate lunch, then Daniel went to help a friend design a new computer, Adam went out for a run, and I went to do a couple of errands, made more complicated by the fact that the entrance to the Mid-Pike Plaza from Old Georgetown Road has been blocked off since apparently half the shopping center is about to be torn down (Toys R Us, which has been there forever, has moved down where AC Moore used to be; I just hope we get the promised farmers' market soon).

It was warmer than the past two days but still gorgeous and I saw several bunnies in the neighborhood, plus I got a warm greeting (read: I was pursued and rubbed repeatedly) from our neighbor Rose's cat. We had veggie sausages for dinner and watched several more episodes of Relic Hunter with older son afterwards; he hasn't asked for Firefly and I must confess that I like Sydney Fox better than anyone in the latter. Then we watched some of Ken Burns' Civil War series on PBS. Here are some blurry phone photos of the deer around the neighborhood, including the young stag with fuzzy antlers: 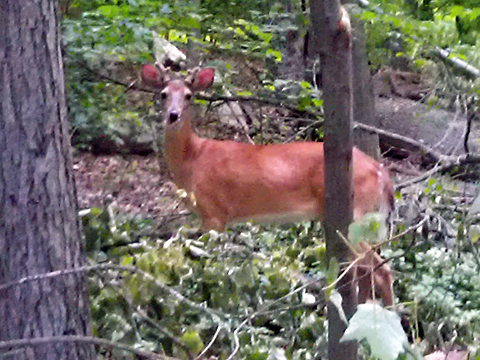