The poem above was the Poem-A-Day at The Academy of American Poets today but I am posting it because George Calvert, who co-owned the Riversdale estate in Prince George's County along with his wife Rosalie whose father built it, rebelled against his strict father's wishes that he run his own famous family's plantations and went to Europe to meet Goethe, Wordsworth, Byron, and Thomas Moore, several of whom's books and papers were found in the house and inventoried at the time of Calvert's death. The house contains reproductions of paintings of the six Lords Baltimore, from a George Calvert born in 1625 to Frederick Calvert, oldest brother of the George Calvert who co-owned the estate.

Our reason for visiting this weekend was because there was a Roman encampment on the Riversdale estate, including several local groups representing several different eras of Roman history (and costumes and armor). The Augustus-era British legion seemed to have the most people -- they were only mildly amused when I said that I was on Boadicea's side -- but the late Roman Empire Christians were demonstrating archery and their weapons while we were there. Sadly, we did not get to see the artillery demonstration because the catapult's rope broke and we needed to pick up Adam at Glen Echo. 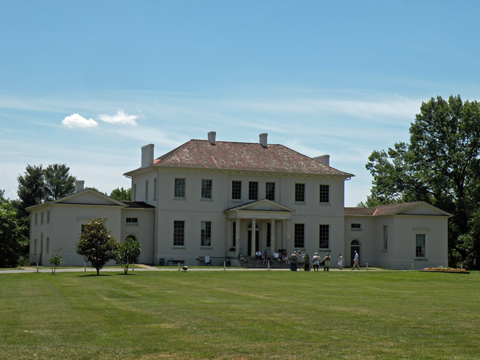 We had herbed chicken (well, tofu) and dumplings for dinner, then we were in the mood to watch Life of Brian because there was faux Roman graffiti at the encampment and we were walking around quoting it all afternoon. That movie never gets old and never makes me stop laughing. The Orioles and Nationals both won today and we couldn't have cared about the Belmont Stakes, but we're bummed that the Celtics lost in the basketball playoffs -- we will be rooting for the Thunder!
Collapse