Monday was relatively dull and quiet after the weekend. Adam got up early to wait for FedEx to deliver a new lens he bought himself for his birthday, then biked with his girlfriend to the mall. Daniel, who was not even out of bed yet when Adam left, eventually got up and discovered that we were out of bread to make sandwiches, so I took HIM to the mall, running into Adam just as he was leaving -- he told us that Hot Topic was closing, so we went in to get Daniel a Tool shirt while it was 50% off. Then we came home to hysterical starving cats who were fed 8 minutes late.

There were several bunnies on my walk this afternoon and several neighbors with whom I stopped to chat, then dinner -- the only time of the day I had both kids in the same room, since Daniel was busy solving a friend's computer problems and Adam went for a run -- then we watched the Nationals beat the Blue Jays and the Elvis episode of Relic Hunter. Now I am surrounded by sleepy cats who are using their cat gravity to make me sleepy too. Here are some photos from Riversdale, the estate of Rosalie Stier and George Calvert near College Park: 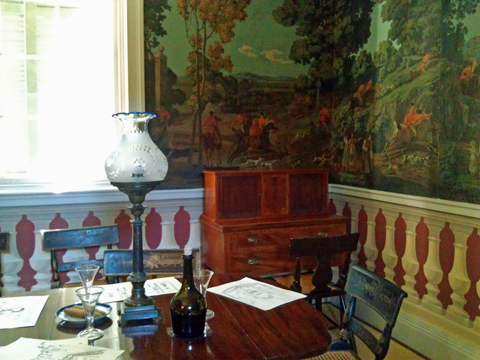