My kids both had lunch dates -- Daniel with my father, Adam with a friend -- so after a morning where I got lots done while they both slept very late, I called my mother to see whether she wanted to meet me at the mall for frozen yogurt (which she bought me with chocolate covered raisins and almonds, mmm). I had to buy some cards at the Hallmark store (belated anniversary for relatives, congrats on new baby for Adam's girlfriend's parents) but otherwise my biggest point of amusement at the mall was overhearing a conversation in which a girl accused her mother of always going for the jungular, then, when her mother said she hoped the daughter meant jugular, complained that her mother always treats her like she's stupid. I know I should feel badly about these sad family dynamics, but I kept thinking "jungular" and bursting out laughing.

I got home before both kids -- Daniel went to play Wii Bowling with my father and Adam went out to take photos with his new lens -- so I started folding laundry and put on Mr. Popper's Penguins, which is now on HBO though my attempt to record it failed, as our recorder is now destroying more discs than it closes successfully. It's quite silly but I can't imagine how terrible a movie with penguins would have to be for me to dislike it. We had homemade pizza for dinner and watched a PBS special on the War of 1812, which helpfully had quite a bit about the British desire to sack Baltimore since we are going to Baltimore at the end of the week for the Star Spangled Sailabration. Here are some more photos from Riversdale: 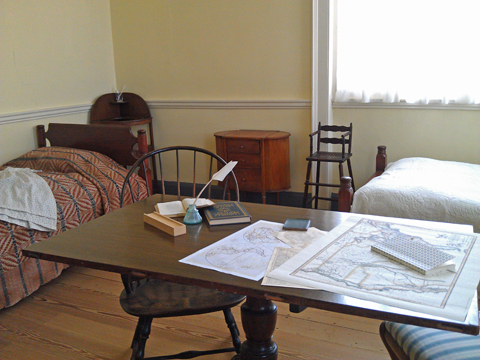