Wednesday was relatively uneventful. I had an ophthalmologist appointment early, so I went and had my eyes dilated and returned home before either of my kids had come downstairs. After lunch, Adam went out running and I took Daniel out to do a couple of errands, during the course of which my mother called to see where we were, so we ended up meeting again for a yogurt in the mall (Daniel had Haagen Dazs). I behaved at the Brighton sale, then stopped into Bath & Body Works' big sale and spent less than $6 for lots of Dark Kiss and Charmed Life.

I saw bunnies, deer, and crazy squirrels in the woods while Adam was at tennis, then we had dinner and watched the parade of sail as the ships entered the harbor for Baltimore's Star Spangled Sailabration in honor of the War of 1812. Then we watched the pilot of the new Dallas, which I am embarrassed to admit I really enjoyed -- I had stopped watching by the time I started college in 1984 and I never saw any of the reunion sequels, but I love that Sue Ellen is running for governor and that J.R. got the son he deserves. Here are some more photos of the Roman encampment last weekend: 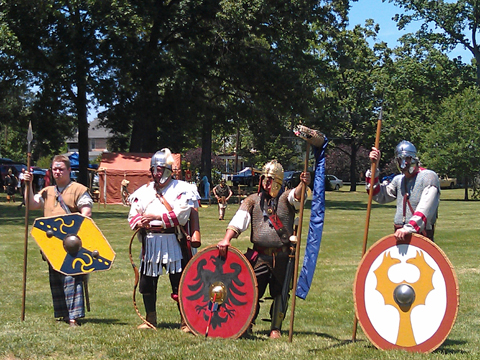