Paul took Friday off and we spent most of the day in Baltimore at the Star-Spangled Sailabration, a multi-day festival commemorating the bicentennial of the War of 1812 with tall ships from all over the world, free concerts, and events ranging from costumed reenactors discussing how the war affected Maryland's various counties to the Blue Angels performing over the city (we saw one of the planes practicing over the highway in the afternoon). The bigger ships all had lines 45 minutes to an hour long, so since we've been on Cisne Branco and Cuauhtemoc before, we walked around the harbor with 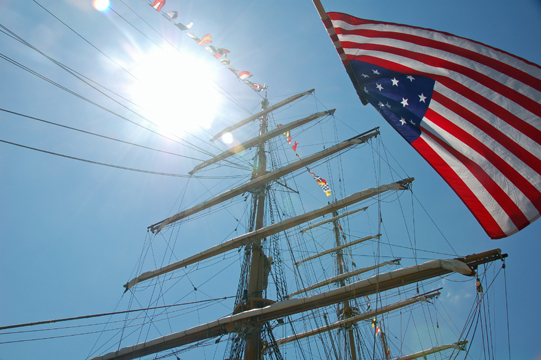 We had lunch sitting in the grass by the World Trade Center, then we walked back around the harbor to the Maryland Science Center (of which we are members) so that we could see the tall ships from the upper floor windows and get our parking ticket stamped. We came home late in the afternoon so that Adam could walk the neighbor's dog and I could post a review of Deep Space Nine's "Shadowplay". Then we had dinner with my parents, caught some of the Nationals-Yankees game (which did not go well for the Nationals, nor did the Orioles beat the Braves, waah), and then watched a couple of episodes of Relic Hunter with Daniel, which it is quite delightful to revisit.
Collapse