This will be a quickie because our cable is out at home following a huge storm at dinnertime so I am connecting over my phone's 3G. I was awoken early by pacing cats and spent the morning working on a review of Deep Space Nine's "Playing God" -- plus I wanted to record Eating Raoul while it was free on cable since our DVD copy from my VHS tape is terrible, and that movie never fails to crack me up. We were a bit stir-crazy in the 95-degree heat and went to the mall for lunch -- Adam and I split egg and Nutella crepes, Daniel got a sandwich, afterward I went to the grand opening of the Vera Bradley store which is very pretty but had no great bargains while the kids went to the Apple store, same problem.

Adam's friend came over when we got back and the three kids played video games for a while, then we went to my parents' house for dinner just as the storms rolled in. When we got home, we watched The Ides of March, which I enjoyed more than I expected -- I'd been warned that the women's roles would not impress me and that was true, but I thought Gosling, Giamatti, and Hoffman were all terrific and Clooney was quite convincingly detestable. Now we can't properly follow the Orioles' defeat of the Nationals nor the fallout from the Sandusky verdict since we have no cable. Here are some more photos from the Star-Spangled Sailabration last weekend in Baltimore: 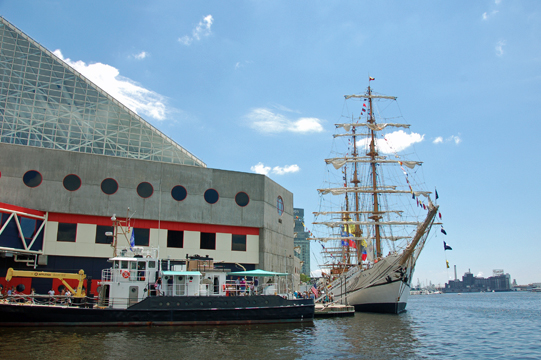