After the huge storms Friday night, Saturday was thankfully cooler -- only 91 degrees! I'm not entirely sure where the morning went, and at lunchtime we all went to take Adam to work at Glen Echo so we could picnic there while the 229th Army Band's Old Line Brass Quintet played in the Spanish Ballroom for Heritage Days. There are many Civil War commemorative events going on -- tours at Blockhouse Point, train exhibits -- and after we ate we went to Vienna, Virginia, where a group of reenactors had a living history encampment and where the Elkton Eclipse was playing the Chespeake Nine in a vintage baseball tournament using Civil War-era rules, meaning no gloves, only underhand pitches, and a ball caught after a single bounce gets a player out. 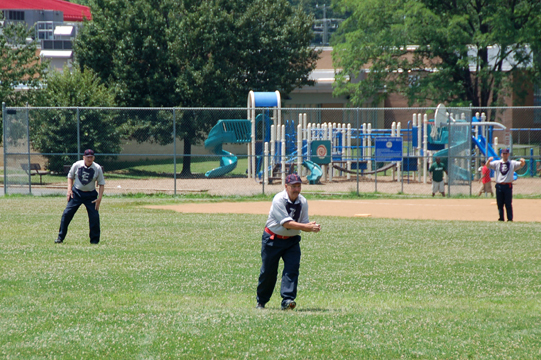 We went back to Glen Echo to pick up Adam and took him to walk along the C&O Canal where we went last weekend since he wasn't with us and we thought he'd want to take photos. It was later in the day and fewer animals were out showing off in the heat -- we didn't see the herons or snapping turtles, though there were red-eared sliders, bullfrog tadpoles, catfish, cardinals, dragonflies, and lots of songbirds. After dinner the kids had a friend over to play games, so Paul and I watched Water For Elephants, which was reasonably well acted, decently scripted (I did not read the novel), yet hard for me to sit through at times because I have a really hard time with people abusing animals even if I know it's fictional in a movie. The elephant was my favorite character.
Collapse