Uggh, my throat feels worse and my sinuses are driving me crazy and although it was gorgeous out today it's supposed to be nearly 100 degrees by Friday. Adam's girlfriend was nearly driven over by a car on her way home from health class; she came over here because it was closer than home, very shaken, while Adam was at the pool, then he spent the rest of the afternoon with her while Daniel went to play miniature golf with my mother.

I folded laundry while watching Easy Virtue because I was in that sort of a mood. We had some kind of awesome country chicken (well, fake chicken) with raisins, almonds, and tomatoes for dinner, then we watched Dallas which made me so happy by having Sue Ellen, J.R., and Cliff Barnes in a scene together -- those were the days -- then Futurama which made me happy by having a presidential election with an "earth certificate" controversy and Nixon.

Today while walking, in addition to two bunnies sharing a clover patch, I saw a deer with three fawns -- possibly the deer I've been seeing with two fawns plus an adopted addition, I've never seen a deer with triplets -- so I followed them from behind my house across a cul-de-sac, through a neighbor's yard (I went around) into the woods. Spot the bonus bunny in the sadly blurry phone photos: 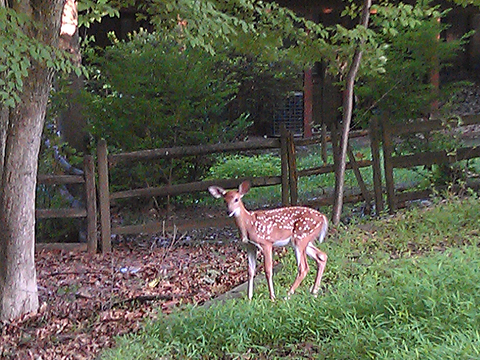