It was just as hot on Saturday as we had been warned it would be -- 103 degrees in D.C., according to my phone -- so we wanted to spend as little time outdoors as possible. We dropped Adam off to work at Glen Echo (in the air conditioned photo gallery) and went to the Hillwood Museum to see Prêt-à-Papier: The Art of Isabelle de Borchgrave, who recreates historical costumes from paper that she folds, crumples, paints, stitches, and spatters with glitter -- there's a short film in the visitor center, while the costumes themselves are displayed in the Adirondack Building and throughout the mansion: 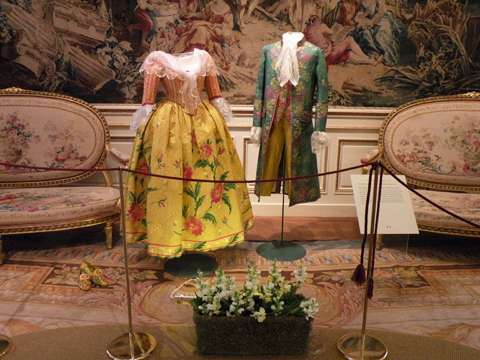 We didn't spend any time in the gardens due to the heat but instead came home, retrieved Adam, and eventually went to meet my parents at Ted's 355 Diner, which has replaced the Hollywood Diner on Rockville Pike. I had a feta cheese omelet that was very good but being so warm makes me not very hungry; Adam had pasta, Daniel and Paul had sandwiches, parents had Greek food and everyone was happy. We came home and watched Dial M For Murder on PBS after discovering to our horror that we did not have it on DVD, only on ancient VHS, and now we are hoping the storms we may get tomorrow have mercy on the area!
Collapse