It was hot but mostly overcast on Saturday, so after we dropped Adam off to work at Glen Echo, we went to Butler's Orchard to pick blueberries and blackberries. It wasn't crowded and there were lots of berries, even though the blueberries are at the very end of their season and the blackberries are just coming ripe. The blueberry fields are at the far end of the orchard from the entrance so they took us out there by bumpy tractor, giving us a view of the corn and pumpkins growing there. We got some veggies in the farm store, then came back to pick up Adam. 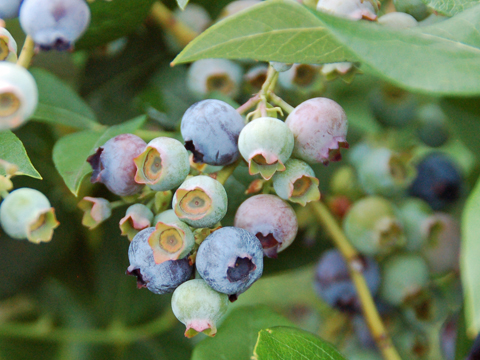 Paul made ratatouille and coq au vin for dinner for le quatorze juillet, plus chocolate mousse. (Adam had dinner at Maddy's house but managed to be home in time for the mousse.) We watched Sharpe's Enemy, figuring it was appropriate since Sharpe quotes Voltaire and there's a good-guy French colonel, though it's one of the sadder Sharpes. Then we watched Relic Hunter's Nostradamus episode -- "The French Connection" -- which by coincidence was the episode we were up to!
Collapse