We had plans to go to Longwood Gardens on Wednesday, but the weather forecast was so disgusting that we postponed it a day. At lunchtime it was 100 degrees; then we had a four-hour thunderstorm warning, though the worst part of the storm thankfully went south and east of us, which at least broke the heat. I took the kids out to Lebanese Taverna for lunch so I could make them carry cat litter and cans of cat food from Petco, plus I dragged them into Tuesday Morning.

I took a walk in the early evening when I was sure the rain had passed -- so were four bunnies -- then came home for dinner. We watched Dallas, which had too little J.R. and Sue Ellen this week, then we watched Futurama, which was funniest during its 30 seconds picking on GMO products. Now we are watching Jon Stewart interview Sigourney Weaver, who I am happy to have on TV regularly. Nationals won, Orioles won, have some Calvert Marine Museum critters: 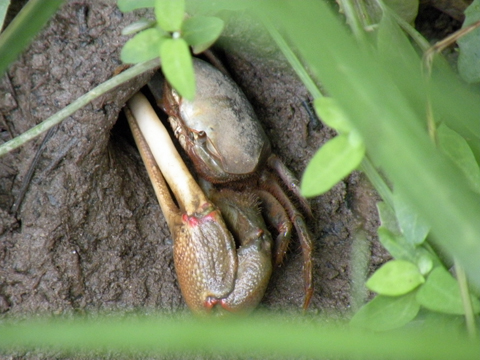