After a morning of on-and-off rain, the sun finally came out Sunday after noon, so we went to Claude Moore Colonial Farm, which was having a colonial fair this weekend. They have twelve piglets, but the pigs, sheep, and cows were not out, though the farm had sent out a mailing saying people would be able to see them, which was disappointing. Still, we got to see a sword demonstration, lots of wool and needlecrafts, some woodworking, several musicians, and we got to see the geese, turkeys, and chickens being herded by kids working at the fair. 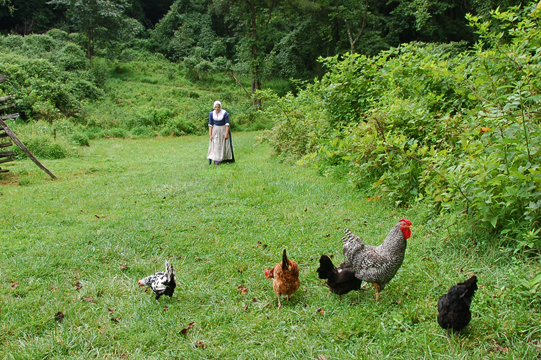 Adam biked to Glen Echo to drop off photos he will have in an art show, then stopped by his girlfriend's on the way home and stayed there for dinner. The rest of us watched the last episode of Queen and Country, then a PBS special on Dale Chihuly's exhibition at the de Young Museum in San Francisco, then this week's episode of Political Animals, where I'm a bit sorry that Bud Hammond is so much more compelling and clever-sounding than President Garcetti -- poor guy doesn't have a chance of impressing us -- but I'm loving Weaver, Gugino and Burstyn.
Collapse