Happy Lammas to everyone who celebrates. On Tuesday we decided we needed bagels, so at lunchtime the kids and I went to Bagel City to get a dozen plus some veggie cream cheese. We had a storm watch for most of the afternoon and heard thunder for quite a long time, but we only got a few drops of rain here and I got to take a nice long walk on this relatively cool (for this summer) afternoon.

I decided I'd had it with NBC broadcasting interviews with American swimmers while the women's gymnastics team final was happening live, so I figured out how to get the live stream to play on my laptop without glitching. Without any spoilers for the west coast, it was awesome -- so much so that I rewatched it on the big screen at night. I am also very happy for certain swimmers and a certain granddaughter of the Queen.

Adam went running and biking and talked to his girlfriend who got her bike stolen while she was at the Smithsonian (it was chained up -- cautionary tale if you use a bike chain on the National Mall!). Daniel chatted with friends from fencing about the epee controversy with the Korean Olympian who staged a sit-in after a buzzer went off too early. Here are some photos outdoors at Lewis Ginter Botanical Gardens: 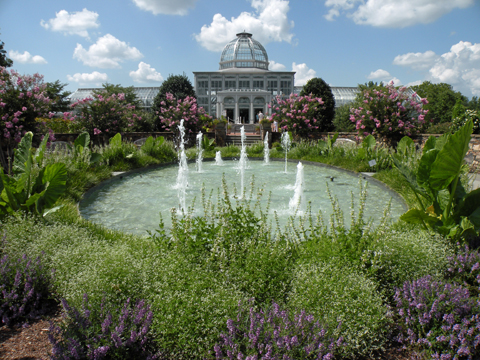