We spent Saturday making sure we had everything we needed for the beach -- food store, CVS, gas, etc. Plus we stopped at the library to pick up some things we had on reserve, and I walked into the permanent book sale they have to benefit the library system and found Marge Piercy's City of Darkness, City of Light (the French Revolution novel), a hardcover first edition, for $1. Autographed by Piercy, whose Woman on the Edge of Time is in my top 10 forever; I wrote part of my M.A. thesis on it. I feel sort of badly because if the library had wanted to do they could have sold it for 50 times what I paid for it, so I shall just have to buy more books next time I am there.

A friend of Adam's went out to Subway with him, then came back here to do AP English summer homework with him, which involved reading several essays that apparently bored them both to hysteria because they were reading aloud from them making snide comments. The rest of us watched Iron Man 2, which I avoided when it was in the theaters because I hated the first one so much, but I liked Avengers enough to figure I'd watch Natasha and ignore Tony Stark, and I did like all the Avengers connections. And the bird. Here are a few more photos from Butterflies Alive at Lewis Ginter Botanical Gardens: 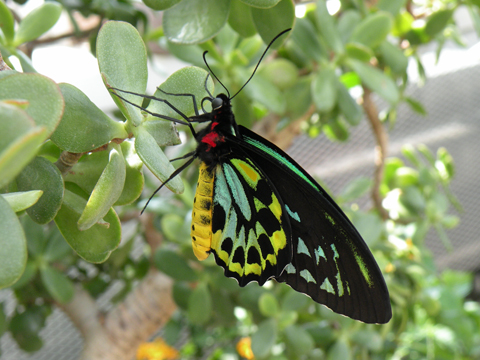