We got up early on Thursday -- though not as early as younger son, who was out before 6 a.m. to photograph the sunrise and saw many dolphins -- so we had time to walk on the beach before we had to check out of the hotel. It was only slightly overcast and quite hot, and the water felt like it would have been great for swimming. I briefly captured a couple of sand crabs to say farewell and watched the plovers run into the surf before we had to go back to the hotel, pack up, and drive to Virginia, where we had a picnic lunch at Lafayette Park in Norfolk.

Then we went to the Virginia Zoo, which was larger than we expected from the web site map. There are large Asia and Africa regional exhibits where we saw many animals, including tigers, monkeys, sun bears, red pandas, otters, orangutans, giraffes, elephants, ostriches, meerkats, snakes, and many other animals. It was over 90 degrees and we got very warm, so before we got too tired we headed for home, stopping at Carlos O'Kelly's in Fredericksburg for Mexican food on the way. 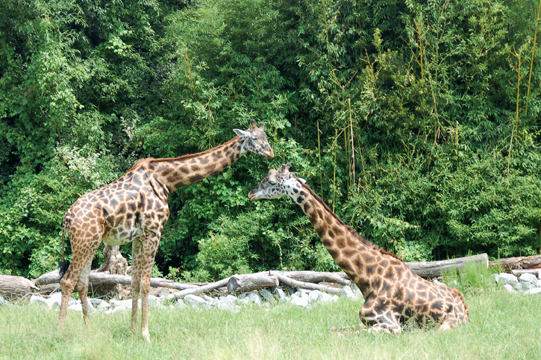 We thought our cats would be happy to see us but apparently Adam's girlfriend took good care of them because after initial demands for food, they mostly went about their usual evening business (sleeping on sofas, chasing each other, stealing food). We caught up on the Dallas season finale and some of the day's Olympics, and I started the first of the many laundries that a beach trip always creates!
Collapse