apaulled took Friday off from work so that we could go to Baltimore, whose Inner Harbor is currently encircled in fences for the Grand Prix next week. We went first to the Maryland Science Center to see the Beavers IMAX, which is excellent (and not about what you're hoping, as I told older son, hahaha) -- it follows a pair of young beavers as they build a dam and raise a family, filmed in Alberta in a gorgeous part of the Canadian Rockies. I did not realize that beavers were so chatty with one another, nor that they stayed active all winter. Then we went to Harborplace for lunch since older son has wanted Subway for two weeks, though we have offered him all sorts of more glamorous restaurants.

Then we walked around the harbor to the National Aquarium, where we met

perkypaduan, since our main objective was to see the Wings in the Water exhibit before the aquarium tears it down to build a new reef exhibit. Sea turtle Calypso and the zebra sharks will be returning, and a couple of rays and bonnethead sharks have been moved into the big open ocean tank, but the rest of the rays and fish are being sent to other aquariums and it looks like the big open center of the aquarium will be gone, which makes me very sad. Divers were feeding the animals, so we got to see lots of sea turtle and ray antics, plus we went to visit the puffins when they were being fed as well. 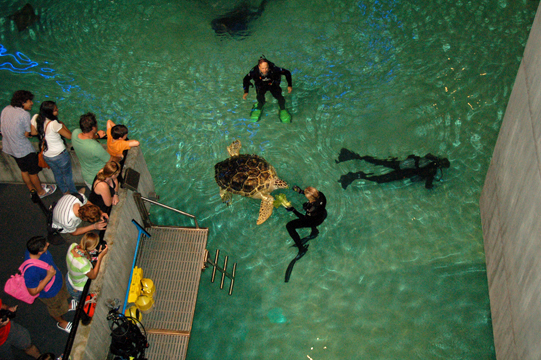 We had dinner with my parents and reconnected with younger son who didn't go with us, since he had work in the morning, cross country in the afternoon, and driver's ed in the evening. I posted my review of both parts of DS9's "The Search" and we spent the evening watching The Hollow Crown's Henry V, just as well acted as the first three; the scenes that make the French out to be villainous have largely been trimmed, so Henry seems to have more of a moral dilemma about the ethics of warfare to secure a crown than in most productions I've seen. Again Hiddleston is terrific.
Collapse