It was a fairly quiet Tuesday, work and laundry and catching up on phone calls; Wednesday and Thursday involve carpools and the first cross country meet of the season and Back To School night, so those will be much more hectic. We did get to see Sean Bean's episode of Accused, "Tracie's Story," which is depressing but excellent and Bean is extraordinary -- not primarily as his transvestite persona but as the self-confessed most boring man in the world, the high school teacher who recites Wordsworth and Tennyson to disinterested students.

I have had a request for more Kermit the Frog pictures on Maryland's campus, though sadly I only know of one other than the one I posted the other day -- the Fear the Turtle statue made over to look like Kermit. Testudo himself has been around since 1932, when the football coach suggested the diamondback terrapin as the school's mascot, for which I will always be grateful. The original 1933 bronze terrapin sculpture may not be as glamorous as the Kermit bench but has been abducted by Johns Hopkins and UVA students and has many imitators: 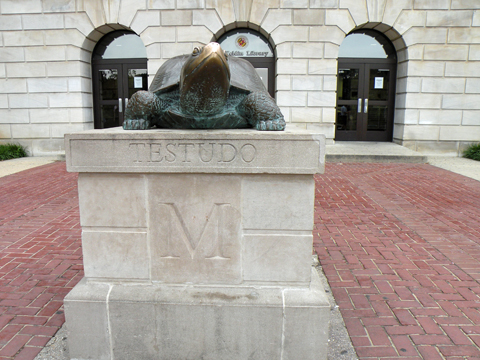