Adam had his first cross country meet of the year on Wednesday and did very well -- well enough to go to the invitational relays -- so that made it a good day, though it was otherwise pretty uneventful for me! Political coverage was literally making me nauseous at times so I stuck to news about rare sand cats born in Israel -- well, thanks to Daniel I did read Obama's Reddit AMA -- and did relaxing things like work and folding laundry! My favorite line of the day came from Futurama's season finale, in which a shot of the New Jersey Turnpike revealed a warning sign: "Highway Jammed with Broken Heroes On a Last Chance Power Drive"!

My laundry folding movie was A Dangerous Method, which I watched with trepidation because Cronenberg is sometimes so violent and misogynistic that I can't finish his films. This one was quite good, though Mortensen and Knightley both could have used a few more weeks working on their accents. I didn't know anything about Sabina Spielrein until I Googled her midway through the movie and it was worth watching just because I now know who this extraordinary woman was, though unsurprisingly the film treated her nearly as badly as Jung and Freud did (it sure sounds like they both stole her ideas and published them as their own). ( Collapse )

Some of this summer's deer in the neighborhood (photos taken with my mobile phone, excuse the quality please): 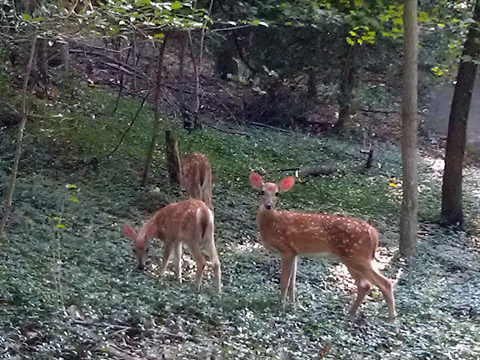