My Friday morning mostly involved Pinterest, running out to the mall to use a Brighton gift certificate I got as a surprise in the mail from the company to buy this necklace and some beads to put on it, and finishing a review of Deep Space Nine's "The House of Quark". Then we went to pick up Daniel from College Park for the long weekend and two Renfaires, and stopped at the food store to feed two growing boys. They're already getting Halloween stuff in, which always makes me happy!

We had dinner at my parents' with Adam and his girlfriend, then we came home, watched a couple of episodes of Relic Hunter, and then Stewart and Colbert made my week by concisely summing up the RNC platform. I did not think anything could beat Jon Huntsman eviscerating his own party, but the analysis of old white guys arguing with an imaginary Obama, followed by the interview with Eastwood's chair (ending with the chair persuading Colbert of all of Obama's accomplishments), just filled me with glee. And the Nationals and Orioles both won.

Here are the red pandas at the Virginia Zoo, who have an air conditioned hut for days like the one where we were visiting when it's over 95 degrees! 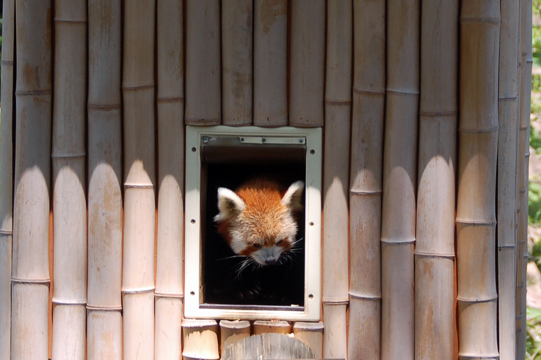