We had tickets from a local deal for a boat ride on Capitol River Cruises, and since they were going to expire after the long weekend, we picked Adam up after a morning race in Gaithersburg and took the kids to Georgetown and rode on the Nightingale down past the major DC monuments. It was pretty hot but there was a nice breeze on the Potomac and lots of people to watch waterskiing, paddleboating, and canoeing as we passed. We were in the front part of the boat, which at first I thought might get too hot from the sun, but the views were great and we got lucky in that a train went over the old bridge just as we passed under it. 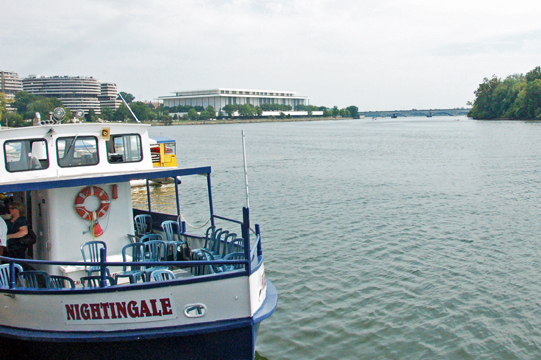 In the evening Adam went out with friends and the rest of us watched the season premiere of Doctor Who. I know that many people get irritated at my failure to adore Moffat and his version of the show, so if it's just going to upset you, don't read ( Collapse ) We watched the first two episodes of Copper afterward -- we had missed them because of Political Animals -- and though I thought it was very well put together, the acting and filming and much of the dialogue, it's not really my thing (even more violent than Boardwalk Empire, so I doubt I'll be sticking with it.
Collapse