On Wednesday I finally broke down and did something I've been thinking about literally for years: I got a pro Flickr account. I can't afford Google, Dropbox or Amazon's cloud storage for the number of gigabytes I have, and after spending weeks (literally) trying to back up first to CrashPlan, then Carbonite, realizing that it would take just as long to download everything if I ever needed to, I came to the conclusion that Flickr is the most cost-effective way to store thousands of large photos offsite. Once they're uploaded, the visual interface is terrific (organizational tools, sizing options, degrees of privacy, no bandwidth limitations) -- but unfortunately the only way to upload is in batches of 200 using one of Flickr's uploaders, which is not only slow but labor-intensive. I spent hours uploading and am only through my 2003 photos.

Not much else happened that was exciting. Adam went to cross country practice after school and was not happy to have to run six miles in the muggy heat (I didn't go for a walk until after 6 p.m. and even the bunnies were hiding). I debated watching the Democrats all evening, but Paul reminded me that it was the first night of football season -- Cowboys vs. Giants, no less -- so we kept switching to that, and now we have Comedy Central on, though Stewart's DNC coverage has been pretty flat so far and Clinton is on top of his game. Here are some more photos from the rainy Pennsylvania Renaissance Faire on Labor Day! 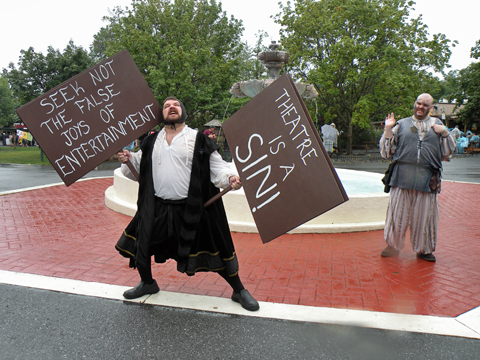