Paul worked from home on Friday, so I had company while I was working on my review of Deep Space Nine's "Equilibrium" and doing various unexciting chores. I distressed my cats by putting a new comforter on the bed, an activity they were certain I chose specifically to annoy them. I was going to run out to a couple of stores, but for a variety of reasons, mostly involving wanting to see Adam after school and wanting to finish uploading some 2005 photos to Flickr, that got put off till the weekend. Adam had dinner at Maddy's -- something we only learned he intended to do last night -- so just the two of us had dinner with my parents.

We watched the beginnings of both the Nationals and Orioles games, but neither one was going well so we put on J. Edgar. I wasn't all that impressed with it (and truth be told I kept getting distracted and losing the thread) -- I felt like DiCaprio was playing a watered down riff on his characterization from The Aviator (what is it with him and neuroses blamed on domineering mothers), I disliked pretty much all the women's roles, I was annoyed that the screenplay was so half-assed concerning his supposed sexual unconventionality. Some more photos from Monday's very rainy Pennsylvania Renfaire: 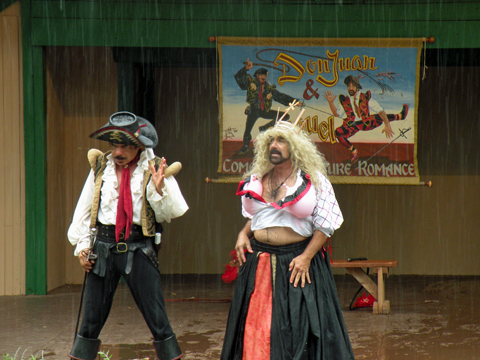