Wednesday was not terribly eventful, though the weather was gorgeous, which helped me stay mellow. I did a bunch of work on web pages while continuing my Upload All The Photos project, drove Adam to the cross country meet that got postponed from Tuesday because of the tornado warning, saw lots of bunnies, squirrels, and chipmunks stocking up on the acorns and seeds that seem suddenly to have fallen all over the neighborhood.

Paul was given a bootleg Madonna concert, which we watched after dinner and it was awesome (on her current tour she segues from "Express Yourself" into "Born This Way," a delightful way of pointing out that the latter is a total ripoff of the former). Then we watched the sad ending of the Nationals' double header; they won the first game and were tied in the ninth but blew it. Jon Stewart, at least, was on fire with his "Bullsh*t Mountain" segment.

Here are photos of the last surviving Bollman iron truss bridge -- in Savage, Maryland by the mill -- invented in 1850 by a Baltimore engineer for the B&O Railroad. This one is a National Historic Landmark: 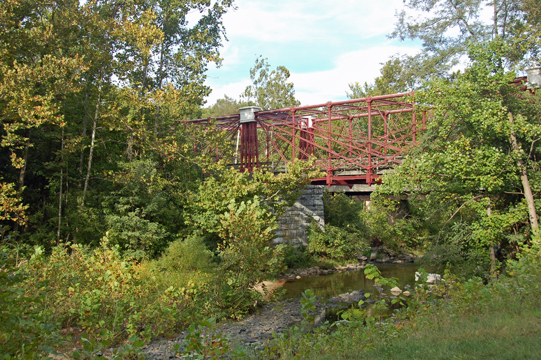