We had yet another gorgeous day, a bit warmer than the rest of the week has been. I spent the morning working on a review of Deep Space Nine's "The Abandoned"; then I went for a walk and took Adam to this week's cross country spaghetti dinner, after which the cross country team walked over to the high school for the end of the football game (which unfortunately the home team lost, but hey, at least the Orioles won today).

Paul and I did a bunch of unexciting chores before dinner (fake chicken parmesan), then after retrieving Adam we watched Black Swan...a movie which reminds me of all the reasons I really dislike classical ballet (I wish I could say "the movie was rife with cliches" but I'm afraid the eating disorders and self-mutilation are all to common, though Barbara Hershey really should have won an award for playing a special class of horror stage mother).

Brookside Gardens butterflies from the Wings of Fancy conservatory exhibit, plus one outside in the park: 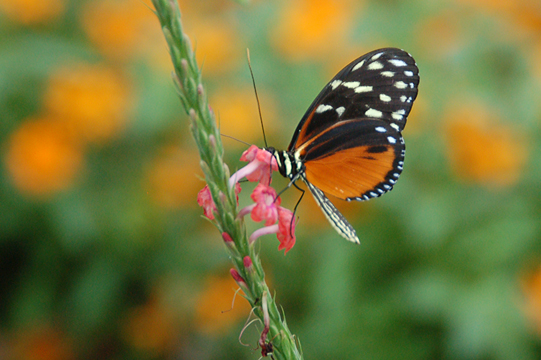