The weather Monday was incredibly beautiful, cool and sunny with a few clouds here and there. All the neighborhood deer and a couple of bunnies were out, as were most of the neighbors, several of whom I spoke with for the first time in months. If a crazy woman had not left her dog out all day long (no leash, leaving it alternately chasing animals in the woods and whining to get into its house), it would have been a perfect outdoor day.

Well, and if the Orioles had won both games in their double-header that would have been nice too, but at least the Nationals won by a huge margin. At least none of my teams were playing football after Warehouse 13 (predictable but fun -- I am not stressing about the Bad Thing because this show loves Miraculous Reversals, and yay for Jeri Ryan), because the replacement refs were as bad as ever, though not as insane as in the Ravens game last night.

I had minor things to say, but LiveJournal has been hanging all evening, refusing to load the posting and editing post pages; Pinterest has been slow too, but it keeps coming back, whereas LiveJournal has simply been impossible despite a status that says the site has worked perfectly since September 11, to which I say HAH. Here are some photos with Adam and Maddy from Homestead Farm last weekend: 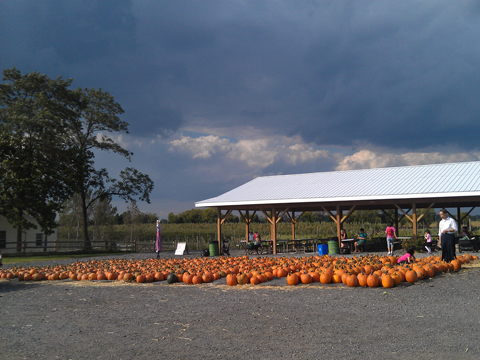