Friday was somewhat atypical. Younger son left early in the morning for the cross country team's trip to North Carolina for an invitational meet. We had thought a couple of days ago that older son was coming home this weekend to see out-of-town friends who will be around tomorrow, but it turns out that he has a group project in the afternoon, so we are just picking him up Saturday before dinner.

apaulled worked from home; I spent the morning watching, then writing a review of Deep Space Nine's "Civil Defense", and we had lunch together. It was a gorgeous day and the deer and bunnies were enjoying the neighbors' late season gardens while I was out walking.

We went to CPK for dinner with my parents, since we had no boys to feed, then we came back home for apple pie. I had discovered that Super 8 was on Amazon Prime and I kept meaning to watch it; I thought I might dislike it because I'm really not a fan of J.J. Abrams, and indeed it had typical Abrams use of female characters (absent mothers, damsels in distress, male angst, Bechdel fail), but the beginning reminded me so much of first season Dawson's Creek when Dawson was making the bad horror movie with Jen, and the end reminded me so much of Close Encounters, and the middle stole so many elements from Matinee that I enjoyed it a lot anyway. Some photos of the Savage Mill ruins: 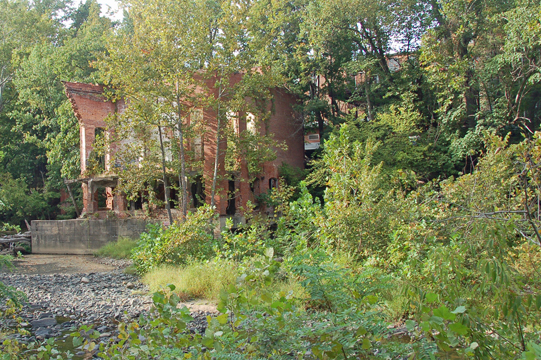