We had a very full and quite delightful Saturday, but it started early for a weekend so this will be quick! We did chore stuff in the morning, then went to meet

sparowe for lunch -- first time I've seen her outside a Renaissance faire, though I've known her online for nearly eight years -- and we shared Greek food at a place called Dimitri's, then went to Ellicott City, which was unexpectedly very crowded because there was a fall festival going on that the city web site neglected to mention. It was fine, though, because we had to park all the way up near the courthouse, which is also near the Patapsco Female Institute, rumored to be the most haunted buildings in Maryland. The ruins were closed but we walked up to the fence to see them, then walked down into the city, where we did a bit of shopping, heard some of the live music from the festival, and saw all the Halloween decorations! 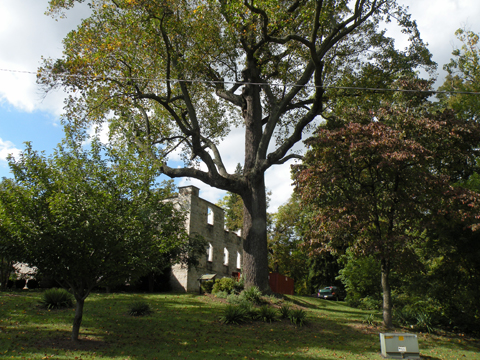 sparowe is going to sell me her DSLR (the same Nikon model as my broken one) and lenses, one of which is an ultra telephoto zoom with a much greater focal range than any lens I have ever owned. I cannot begin to say how much I appreciate this! After we took her home, we went to College Park to pick up Daniel, then met my L.A. friend Lynda and her older son for dinner -- Lynda is a good friend originally from Voyager fandom whose family we have visited in California several times, and her son is now living and working about an hour from us, so since she had never been in the D.C. area before, it was a real delight to have her nearby -- then we had to rush home to pick up Adam who had just returned from his cross country meet in North Carolina, where he ran a 5K in 19:04 and got a medal!
Collapse