I am typing this while watching The Daily Show to calm myself down (!) in the wake of the Orioles loss, the Yankees win, and The Mass Debate, to borrow a favorite family joke (whose major online talking point, about which I cannot stop laughing, was not anything substantive from either candidate, but the fact that Mitt Romney threatened to kill Big Bird). In general it was not a good day for discussing the news, what with Todd Akin claiming that "terrorist" doctors perform abortions on women who aren't pregnant, and Terry Pratchett -- who for years has complained about fan fiction based on his own books -- publishing a novel based on a Dickens character, since apparently it doesn't count as "fan fiction" if you think you're as good a writer as Dickens.

My own day was unexciting in itself. I slept terribly again -- both my arms are sore, the one from the infected bee sting and the other from the flu shot -- so I couldn't get into a comfortable position, then I overslept while having a dream about touring Civil War sites with the casts of Star Trek: The Next Generation and Deep Space Nine (in my defense I had two cats using me as a heating blanket), then I went to both AC Moore and Michael's and though I was led astray by Halloween sales, I could not find the craft parts I went there to get and shall have to order them from Etsy suppliers. I did see three bunnies and four deer, in the woods, and Teddy Roosevelt did finally win a race at Nationals Park, so it was not all a loss. A few more zoo photos: 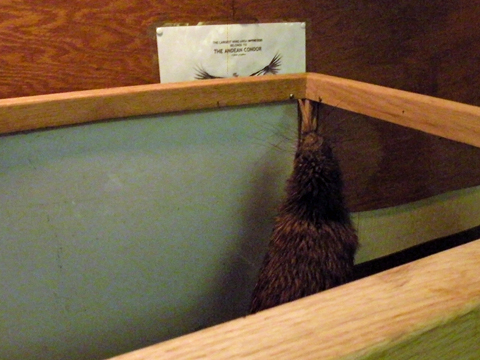