The weather on Saturday was as near to perfect as possible -- low 60s, no clouds, leaves distinctly red-gold -- and though we had to spend a lot of time in the car, we also got to see a lot of trees and sky, so that was all good. Adam was running in the Glory Days Grill Invitational at Bull Run Park in Manassas, and I hadn't realized what a big gathering it would be -- dozens of schools, hundreds of runners, corporate sponsors giving out swag and selling running gear. We arrived just as the seeded varsity boys began their 5K race, so we got to see Sean McGorty at the start of what would be a course record run in 14:45. Adam finished in 18:42, which was a good time for him but he wanted to break 18:30. 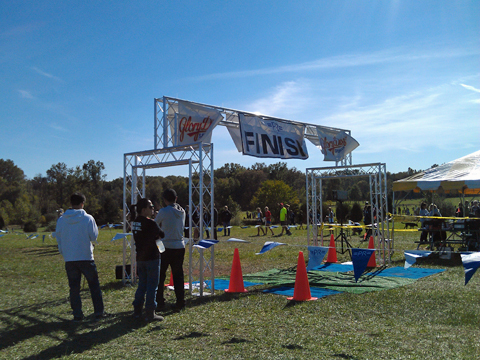 After waiting for Adam to finish cooling down, we drove from Manassas to Dickerson, Maryland, where A Paca Fun Farm was having its Fall Fiber Festival to coincide with the Countryside Artisans tour (unfortunately it was too late to go to any of those places). We got to pet a baby alpaca and meet lots of others, plus the two big dogs that protect them, and there was cider in the shop. In the evening after Maryland pulled out a victory over Virginia, Adam went out to dinner with Maddy -- who made me a wallet out of penguin duct tape! -- and Paul and I had squash, chick pea and lentil stew and watched the first episode of Call the Midwife, which I liked quite a bit despite being squeamish about medical stuff.
Collapse