Monday was...a Monday, meaning there's not much worth reporting. Work, chores, cats unhappy the heat wasn't on in the morning so they tried to sit on me since the vents weren't doing anything for them, realizing I need to go to Whole Foods tomorrow and brave the horrible new parking lot. There was gorgeous weather and deer and bunnies out enjoying it, eating local gardens before the first frost. I could not handle the debate live, instead following various live blogging sites, Facebook, and Twitter while watching this week's Downton Abbey and Merlin. I am still hugely disappointed in the former this season, but it is far less stressful to watch a hyperbolic historical soap opera with lots of sharp women than debates, and the latter so far this season is even better than last season; I swear that Arthur has gotten even gayer since he got married, and the number of hot knights has increased year by year.

Why is this election so divisive? Because you cannot sit there typing "IT'S THE ECONOMY, STUPID" while you are supporting a party that has declared outright its plan to promote wars in the Middle East, further wreck the environment, take away my reproductive rights, treat gays and lesbians as second-class citizens, demolish health care for women, and encourage public schools NOT to teach science, in nearly all cases in order to avoid offending religious Christians rather than because any of this is good for the economy or the majority of Americans in any way. Don't tell me I'M being divisive for demanding to be allowed to keep what progress we've made in the past 50 years when you're name-calling and waving the flag for someone who has repeatedly shown contempt not only for alternative viewpoints but for the very separation of church and state. Here are some photos of Butler's Orchard's farm store decked out for Halloween: 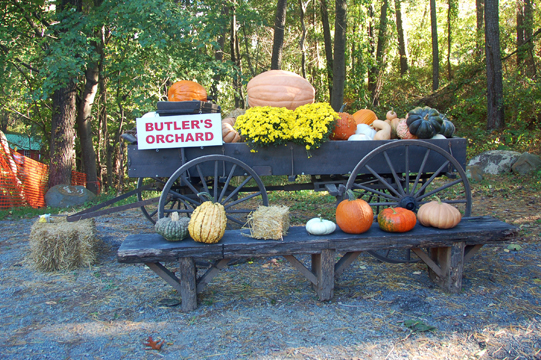