It is probably an odd thing to be upset about the loss of a ship when people have died in a storm -- even one of the crewmembers from that ship, whose captain is still missing -- but with the sinking of the HMS Bounty, I feel like a celebrity I'd met several times has passed away. We lost power briefly tonight, but otherwise I will cautiously say that personally we got very lucky as Hurricane Sandy swept through; we had pouring rain and leaves coming down all day, tree branches scratching our house through the evening, but nothing like what parts of DC and New York City are getting hit with, not to mention the coastal areas. Based on the photos of the island, I am worried about the ponies on Chincoteague, and though everyone I know personally in the evacuation areas of New York has checked in, I'm sure there are plenty of distressed people. The worst injury to anyone I know personally was Adam's girlfriend's father, who fell off a ladder fixing a leaky roof, though apparently he's okay.

My whole family had the day off and will again tomorrow -- Daniel had classes canceled in College Park, Adam's high school is closed along with the rest of the county, and Paul's local office told everyone to stay home. Maddy visited for a while and Adam managed to walk the neighbor's dog, though it was pouring and quite chilly. I did laundry last night since I was afraid of losing power and I folded it today while watching Pirates of the Caribbean: Dead Man's Chest because I wanted to watch a movie with the Bounty in it, then I made some jewelry and rearranged my accessories drawers; I didn't want to start anything on the computer because I thought we might lose power any minute. Evening involved downloaded TV (Merlin, quite enjoyable though they need to give Gwen more to do, and Downton Abbey, better than last week) and a bit of Monday Night Football's lopsided game. Anticipating Halloween, here's the local pumpkin stand and some decorations: 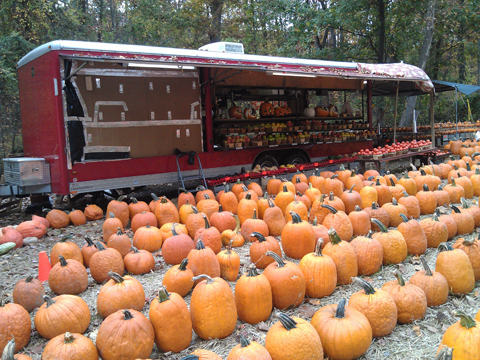