It's hard to believe that Halloween has arrived -- we haven't even carved our pumpkins, we've been so focused on other things, and I've read that trick-or-treating has been postponed in the Hudson Valley while the hurricane cleanup continues. We had rain all day, but in our own neighborhood at least, thankfully there were few indications of how severe the storm was overall. There were a couple of trees down, but nothing like after the derecho in July and nothing like what New Jersey and New York got, plus our neighborhood kept power nearly continuously, though there are people in the region and the state who still don't have it (waves to

thistlerose). I feel very, very lucky, though older son is complaining that Sandy was a disappointment in College Park!

We had a quiet day with everyone home again -- schools closed, Paul's office closed, several local roads closed so we didn't go anywhere besides Adam's girlfriend's house and the food store (having not bought milk or cheese in case we lost power, we were running low). I walked around to see what the neighborhood looked like after the storm, but it was raining and quite chilly, so I didn't cover the entire area. We watched The Runaways because Paul hadn't seen it. I don't understand why people are freaking out about the Disney-Lucasfilm merger, even (or perhaps particularly) feminists: how could anything Disney did possibly be worse than Attack of the Clones? Best of luck to everyone cleaning up after the storm; here are a few unimpressive photos from right around here: 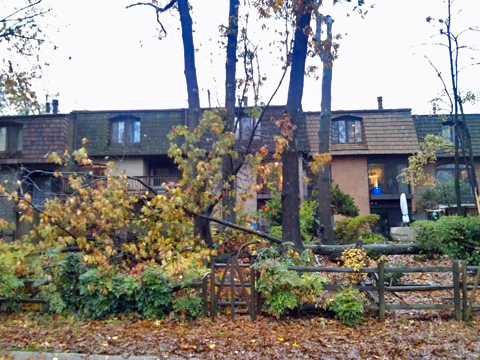