I managed not to get a migraine during the hurricane despite the pressure changes, but the combination of the temperature changes, inhaling someone's cigarette smoke, and having eaten way too much sugar yesterday are making me cross-eyed tonight, so I will keep this short. My morning mostly involved picking up Adam and taking him to the orthodontist for the first full check-up since his wisdom teeth came out, though it wasn't his usual orthodontist, who's unable to get a flight back to the region after leaving on vacation before Sandy arrived. They're thinking about putting him back in a bottom retainer but want to see him again in three months to see whether the teeth are shifting or just adjusted post-surgery.

I walked around the neighborhood twice, once to look at the Halloween decorations before everyone took them down and once into the woods to see the deer -- today the other family appeared, the one with two fawns, a doe and a stag, though they flipped up their tails and galloped away when they saw me. We had Mexican food for dinner for the Día de los Muertos and watched Beauty and the Beast, probably my favorite new show of the season so I wish the ratings would stop dropping, and Elementary, which has already been picked up for a full season so I wish they'd let Watson be clever more often but I'll certainly keep watching. Here are some photos from the C&O Canal before the storm last weekend. Best wishes to everyone dealing with power and water issues! 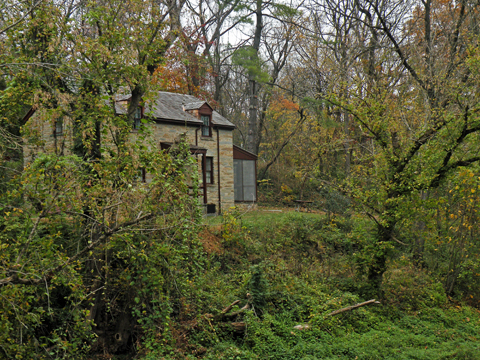