I cannot remember an election night or an election season as draining as this one, not even the nightmare that was Bush-Gore (when the real nightmare was only just beginning right about now on election night). Our original plan for the day was to go to Calvert Cliffs, then swing by the University of Maryland on the way home to pick up Daniel so he could vote in our county where he's registered, but after looking at traffic maps and hearing from people who stood in line for two hours, we decided to stay closer to home and went to the National Arboretum instead. It was nearly empty, the bonsai were in autumn glory and the big trees were still surprisingly leafy and beautiful. I took photos, but I am too exhausted to post them tonight, so have a kitten from Catoctin Creek Farm during the Frederick Festival of the Farm: 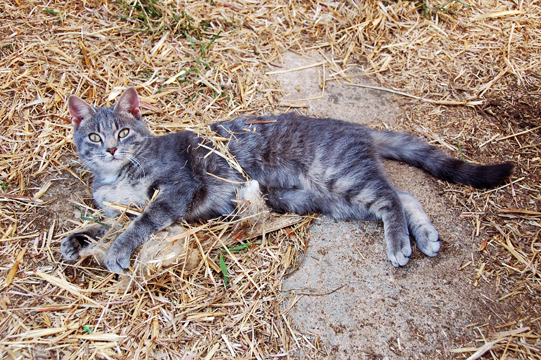 I will not celebrate the presidential race results until Romney concedes and I'm sure there aren't going to be recounts or other shenanigans -- there reportedly were many shenanigans already (mostly by Republicans) at the polls in several states -- plus Virginia and Florida still have polls open in places because they ran out of ballots. Some things I an unequivocally happy about: victories by Elizabeth Warren, Tammy Baldwin, and Tim Kaine; Akin and Mourdock both discovering that being dismissive of women's rights is fatal at the polls; and my own senatorial and congressional races going (not unexpectedly) to Democrats Ben Cardin and John Delaney. Maryland's marriage equality measure is currently too close to call, so I am hoping to wake up and discover not only that Romney has conceded, but that Maryland has become the first state to vote as individuals to legalize gay marriage.
Collapse