My Wednesday was pretty quiet, though I am finally caught up on laundry, the dishes have all been put away, and enough of my stuff has been reorganized in my bedroom that tomorrow I can switch around the closet to get the winter clothes up front (we just need a VVA pickup for giveaways soon). Ireland's murderous anti-choice law, which left a woman dead, made me furious. It was colder than early in the week but still a gorgeous day to be outdoors -- the deer apparently agreed with me -- and

apaulled brought home Brave from Target, which makes me happy though I haven't watched it yet.

I did watch this week's Merlin, which I did not much like -- we were due a Gwen episode, but come on, writers, is THAT the best you can do? -- and Nashville, which I mostly did like though the whole Rayna's-husband's-political-career storyline reminds me of something out of old Dallas episodes and doesn't do much for me. Here are some more photos from Reston Town Center the day of the Nearly Naked Mile; I had never been there before and did not know they had an ice skating rink by the fountain, though it seems too early for the Christmas tree and I don't know what's up with Scooby Doo skating! 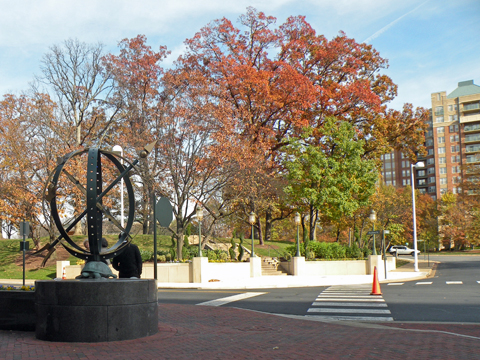